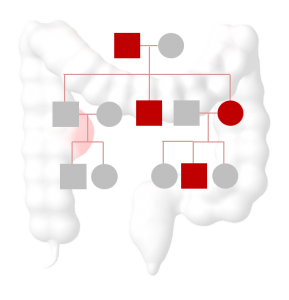 Lynch syndrome is the most common inherited colorectal cancer syndrome predisposing affected individuals to developing cancer at young age. Due to the distinctive character of tumor pathogenesis in Lynch syndrome and well-defined target population, Lynch syndrome represents both clinically and molecularly an ideal scenario for testing the feasibility of immune-preventive approaches against cancer. Our group has been studying the mutational and immune profile of Lynch syndrome-associated tumors for more than 20 years. This research led to identification of candidate neoantigens for a potential preventive vaccination in Lynch syndrome. The identified candidates have been tested for safety and immunogenicity in a Phase I-IIa clinical trial. The tumor-preventive effect of this vaccination strategy in humans needs to be demonstrated in future clinical trials. However, already now the success of this approach could be demonstrated in a Lynch syndrome mouse model. The results of this study were recently published in Gastroenterology.

The study on a Lynch syndrome mouse model for the first time demonstrates that tumor prevention by vaccination with mutation-induced neoantigens is feasible and effective. The immune prevention strategy by vaccination with selected neoantigens therefore holds great promise for individuals with Lynch syndrome. The study is the result of a long-lasting successful collaboration between the DKFZ (Heidelberg, Germany), Heidelberg University Hospital, Weill Cornell Medical College (New York, USA) and the National Cancer Institute (Bethesda, USA). The project was funded mainly by the NCI in frame of the Cancer Moonshot Program and the German Research Foundation (Deutsche Forschungsgemeinschaft). 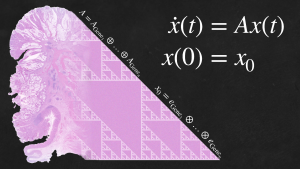 Two studies have been published recently in frame of the “Mathematics in Oncology” collaborative initiative between ATB and the Engineering Mathematics and Computing Lab (EMCL), Heidelberg University (https://emcl.iwr.uni-heidelberg.de/). The first study published in PLOS Computational Biology delivers the results of a new mathematical model of colorectal carcinogenesis that consists of multiple components accounting for dependent and independent mutational events. The obtained simulation results are in concordance with current clinical tumor data, giving hints to the initial steps of cancer formation in Lynch syndrome. The approach provides a modular framework for modeling multiple pathways of carcinogenesis that could be applied to other organs by slight modifications.

In the second study published in Computational and Systems Oncology the scientists used computer simulations to analyze the biological processes behind the invisible initial steps of colon cancer development on a crypt level. Current research suggests that specific mutated crypts are the origin of colon cancer. Analyzing the mutational processes within a crypt is key for understanding cancer development and may have significant implications for cancer prevention. The scientists have now developed a computational model to simulate these mutational processes within a crypt on a computer. These computer simulations allow analyzing if and how fast different so-called driver mutations take over a crypt. The results of the study provide a valuable basis for future studies directed to support tailored management of Lynch syndrome carriers.

Investigating cancer development with the help of mathematics

Dr. Aysel Ahadova from the Department of Applied Tumor Biology, Institute of Pathology at Heidelberg University Hospital receives the Anita- and Friedrich-Reutner-Prize 2020 for her research on tumor prevention in Lynch Syndrome, the most common inherited colorectal cancer syndrome.

This year’s Anita-and-Friedrich-Reutner-Prize was awarded to two scientists for their excellent  contribution to individualized prevention and treatment of colorectal, breast and ovarian tumors.

Dr. Aysel Ahadova from ATB investigates carcinogenic pathways of the most common inherited colorectal cancer syndrome, Lynch syndrome, and their importance for the tailored design of cancer preventive measures.

With the yearly awarded prize of  10.000 Euro Professor Dr. Friedrich Reutner – Honorary Senator of the University Heidelberg – and his wife, Anita Reutner support female scientists of the Medical Faculty, with a particular focus on clinically relevant research questions. 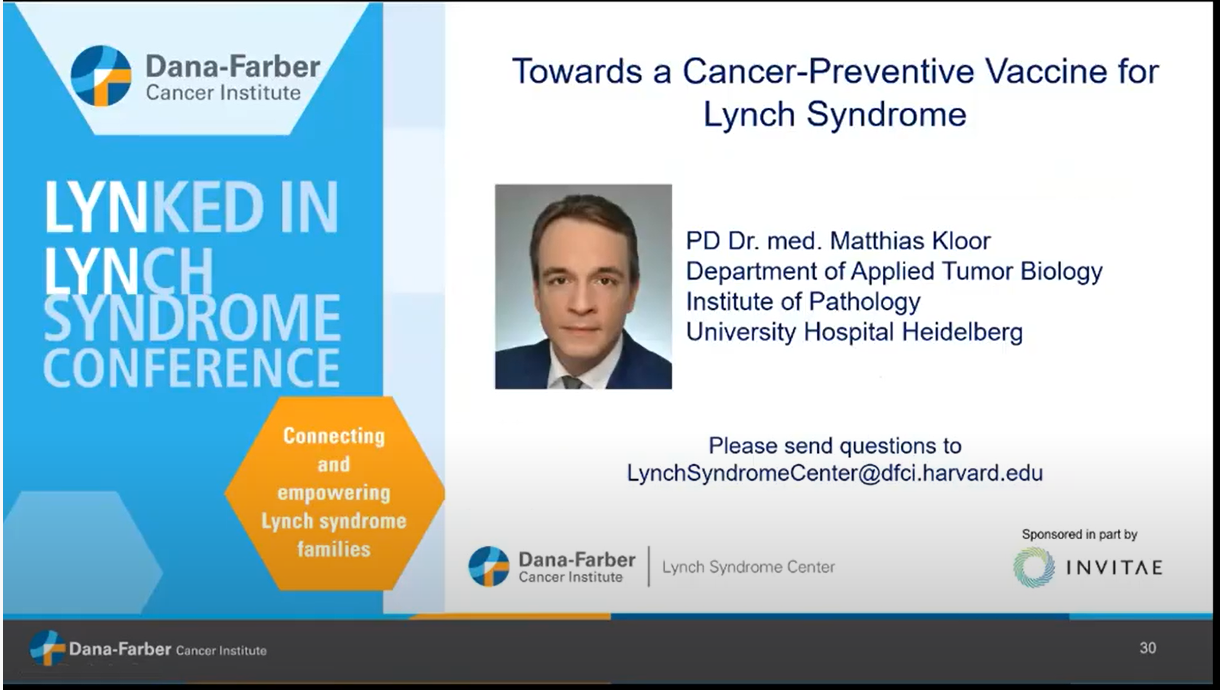 The 5th Annual LYNKED IN conference for individuals and families of those with Lynch syndrome was held on Saturday, September 12, 2020.

Matthias Kloor gave this years’ Keynote Lecture at the virtual LYNKED IN Conference and talked about the latest advances in vaccine development for Lynch syndrome-associated tumors. For watching this and other video presentations from LYNKED IN 2020 please click here.

Immune surveillance and immunoediting in microsatellite-unstable cancers: our new publication in Nature Communications 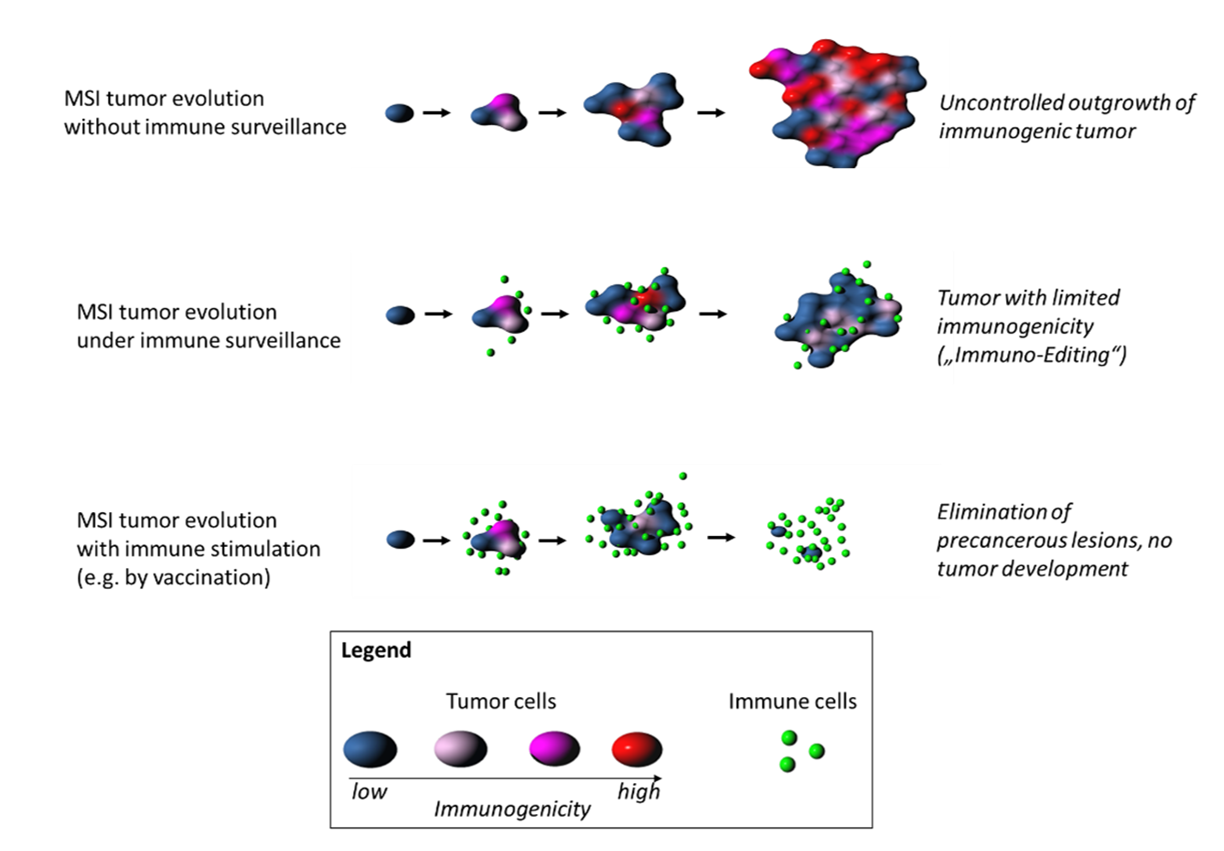 Cancer evolution recapitulates basic principles of biology in a nutshell, as surviving cell clones over time acquire mutations that allows them to thrive in an often hostile and changing environment. Adaptation processes leave their traces in the genome of manifest cancers, so studying cancer genomes can open a window into the past. In this sense, analyzing mutation signals in tumor genomes to unravel early steps of tumor formation shares similarities to cosmology research measuring cosmic microwave background noise to shed light on the origin and history of the universe.

We further discovered a negative correlation between the prevalence of a defined indel mutation in MMR-deficient colorectal or endometrial cancers and the predicted immunogenicity of the resulting frameshift peptide. Our study strongly supports the concept of continuous immunoediting in human cancers and provides new evidence for the hypothesis that immunogenic cancers and pre-cancer cell clones can be attacked and potentially eradicated by the host’s immune system.

This strongly encourages the concept of neoantigen-based cancer-preventive vaccines that may in the future help to reduce tumor risk in Lynch syndrome and potentially beyond. We have recently demonstrated the safety and immunological efficacy of a prototype frameshift peptide vaccine in a phase I/IIa clinical trial.

Read DKFZ, UKHD and HITS press releases on this publication

New publication in the “Mathematics in Oncology” collaboration 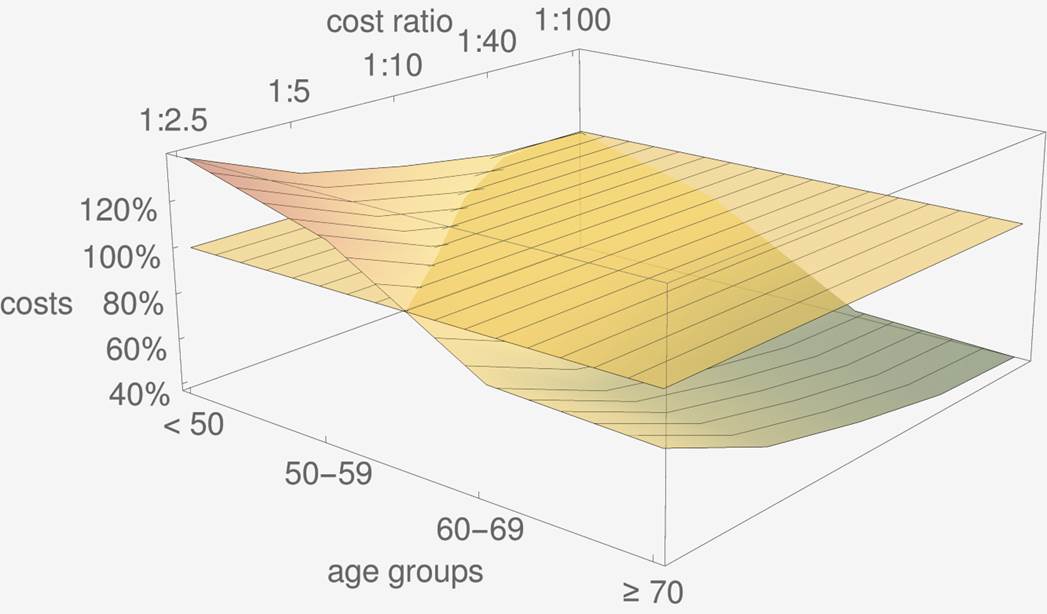 © 2020 The Authors. International Journal of Cancer published by John Wiley & Sons Ltd on behalf of Union for International Cancer Control

In frame of the “Mathematics in Oncology” collaborative initiative between ATB and the Engeneering Mathematics and Computing Lab (EMCL), Heidelberg University (https://emcl.iwr.uni-heidelberg.de/), we aim to gain novel insights into cancer evolution through mathematical modeling of the underlying complex biological processes.
We focus on microsatellite-unstable (MSI) cancers, which show a high number of mutations due to a deficiency of the DNA mismatch repair system responsible for repairing mistakes occuring during DNA replication.

MSI cancers develop in elderly patients sporadically and in younger patients in the context of Lynch syndrome, the most common inherited colorectal cancer syndrome. Lynch syndrome is associated with an increased life time risk of developing cancer in the large bowel (colorectal cancer), the endometrium and other organs.

Lynch syndrome is estimated to affect 1 out of 280 individuals, yet often remains undiagnosed. Thus, a diagnostic procedure with high sensitivity and specificity is of central clinical significance. As BRAF V600E mutations have been reported to be associated with sporadic MSI cancers, current international diagnostic guidelines recommend using BRAF mutations in order to distinguish between sporadic and likely hereditary MSI colorectal cancer. Due to a significant difference in age at diagnosis between sporadic and hereditary MSI CRC patients, we hypothesized that the performance of BRAF testing for identifying sporadic MSI CRC could be age-dependent.
In our recent study, we systematically analyzed data from published studies, public databases and population-base patient cohorts. In addition, we performed sensitivity analysis as well as cost calculations of BRAF testing.
We identified that though being highly effective in older patients, BRAF testing led to a high risk of missing Lynch syndrome patients and increased costs at age <50 years, thereby showing its poor performance in this age group. We therefore suggest to directly refer MSI CRC patients <50 years to genetic counseling without BRAF testing.

The study was developed through the active Mathematics in Oncology collaboration (Link: https://emcl.iwr.uni-heidelberg.de/research/projects/mathematical-oncology) with the Engeneering Mathematics and Computing Lab (EMCL, Head: Vincent Heuveline), Heidelberg University Hospital, together with the Department of General Pathology, Institute of Pathology, University Hospital Leipzig and various institutions of other German universities. Hendrik Bläker from the University Hospital Leipzig, Michael Hoffmeister from the Division of Clinical Epidemiology and Aging Research, DKFZ (German Cancer Research Center), Aysel Ahadova and Matthias Kloor, both from ATB (Head: Magnus von Knebel Doeberitz), designed the study, collected and analyzed data from different sources. From EMCL, Saskia Haupt and Vincent Heuveline were strongly involved in the analysis and interpretation of the data. The study titled “Age-dependent performance of BRAF mutation testing in Lynch syndrome diagnostics” (doi: 10.1002/ijc.33273) was recently published in the International Journal of Cancer. 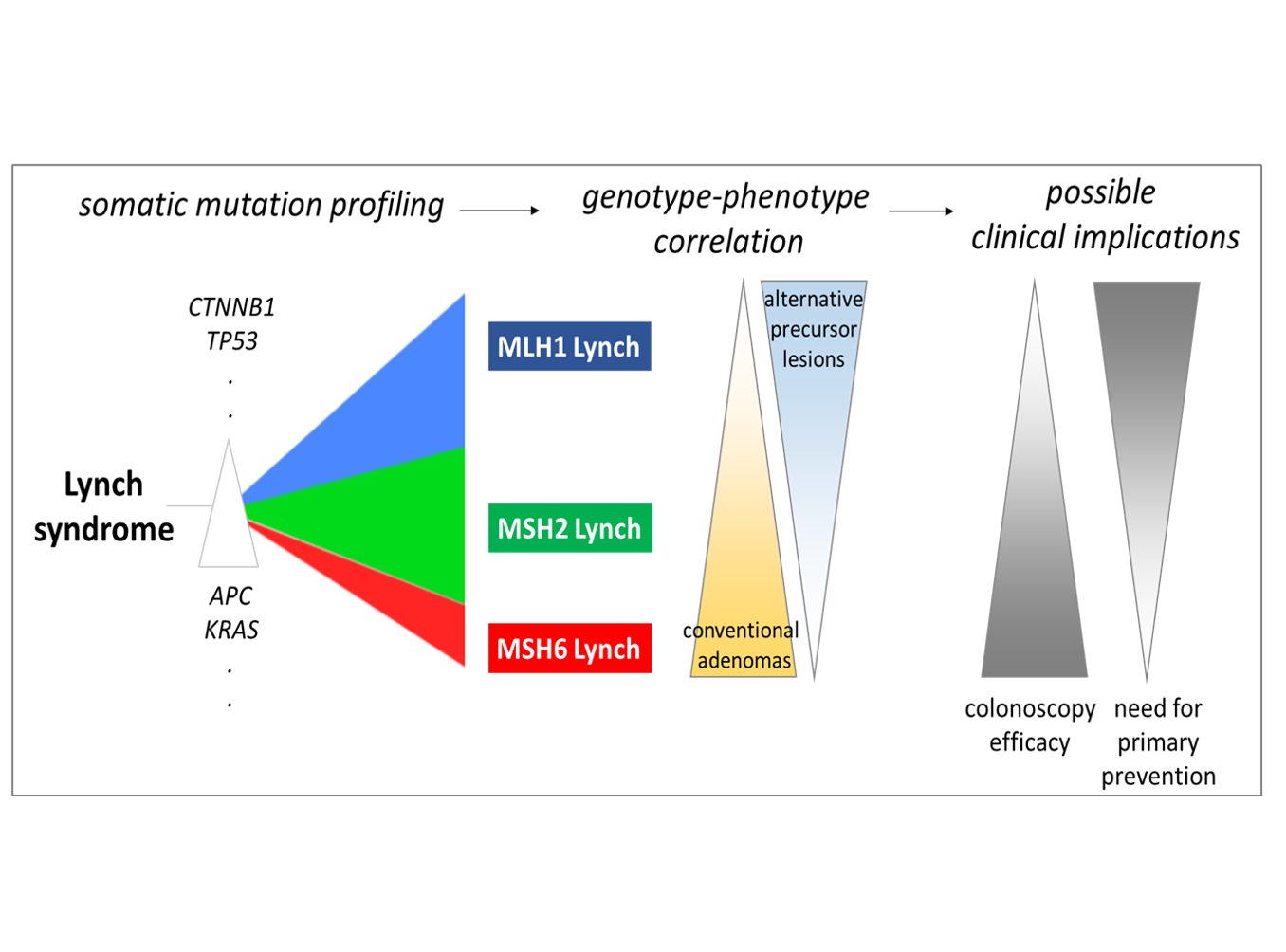 Associations of Pathogenic Variants in MLH1, MSH2, and MSH6 With Risk of Colorectal Adenomas and Tumors and With Somatic Mutations in Patients With Lynch Syndrome. (doi: 10.1053/j.gastro.2019.12.032)

Our data demonstrate that the observed diversity is associated with the MMR gene affected in the germline, and suggest tailoring the preventive approaches for Lynch syndrome carriers according to pathogenic pathways dominating the carcinogenic process depending on the MMR gene.

The study was performed with grant support of Wilhelm Sander Foundation and German Cancer Aid.

Read press release on this publication