A small proportion of individuals that are infected with high-risk HPV types may experience the development of a transforming HPV infection stage. This transforming stage is characterized by the substantial overexpression of the viral oncoproteins E6 and E7, which represent the central drivers for HPV-related cancer development and maintenance. While their expression is tightly controlled in the permissive stage of infection, the underlying control mechanisms become deregulated in the transforming infection stage, allowing for unrestrained overexpression of E6 and E7. The E6/E7 action subsequently causes chromosomal instability and disturbance of tumor suppressive mechanisms. Clinically, the transforming stage can manifest as a pre-cancer or invasive cancer.

The uncontrolled expression of the E6 and E7 oncogenes is primarily driven by a loss of the regulatory function of the viral E2 protein. E2 can bind to so-called E2 binding sites (E2BS) in the viral upstream regulatory region (URR) and thereby control the activity of the promoter for E6 and E7 expression. Research in our department and by other groups demonstrated an important mechanism how a loss of E2 function and subsequent E6/E7 overexpression may arise. It was clearly shown that epigenetic alterations – specifically hypermethylation – within the viral URR can deregulate E2 function and thereby cause a substantial increase in E6 and E7 expression.

Within our research focus of “Therapeutic targets in HPV-transformed lesions”  we develop targeted therapeutic approaches for patients with HPV-induced pre-cancers and cancers. We specifically focus on epigenetic aberrations – a major event during HPV-induced carcinogenesis – as well as on p16INK4a as a targetable tumor antigen. 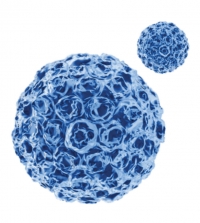