Upon infection of the epithelium by HPV different infection stages can be distinguished, that are termed “latent”, “permissive” and “transforming” stage. 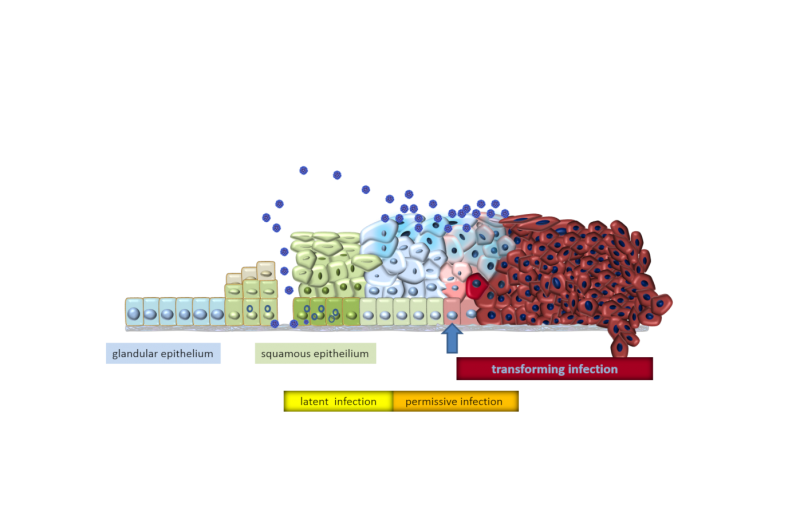 In the “latent” infection stage, HPV generally resides in the cells at very low copy numbers without considerable viral gene expression. This stage cannot be detected clinically. In the permissive stage, the viral early (E) and late (L) genes are expressed in close coordination with the epithelial differentiation program. The encoded viral proteins play major roles for the replication and subsequent packaging of the newly synthesized virus DNA, resulting in the release of new infectious HPV particles at the epithelial surface. The permissive infection stage can appear clinically as warts or low-grade intraepithelial neoplasias (IN), which are generally considered as benign lesions.

A small proportion of individuals that are infected with a high-risk HPV type may experience the development of a transforming HPV infection stage. This transforming stage is characterized by the substantial overexpression of the viral oncoproteins E6 and E7, which represent the central drivers for HPV-related cancer development and maintenance. While their expression is tightly controlled in the permissive stage of infection, the underlying control mechanisms become deregulated in the transforming infection stage, allowing for unrestrained overexpression of E6 and E7. The E6/E7 action subsequently causes chromosomal instability and disturbance of tumor-suppressive mechanisms. Clinically, the transforming stage can manifest as a pre-cancer or invasive cancer. 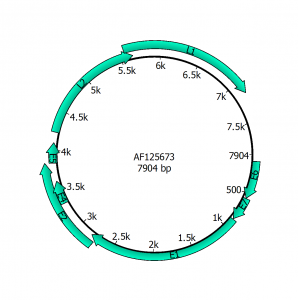 The uncontrolled expression of the E6 and E7 oncogenes is primarily driven by a loss of the regulatory function of the viral E2 protein. E2 can bind to so-called E2 binding sites (E2BS) in the viral upstream regulatory region (URR) and thereby control the activity of the promoter for E6 and E7 expression. Research in our department and by other groups demonstrated an important mechanism how a loss of E2 function and subsequent E6/E7 overexpression may arise. It was clearly shown that epigenetic alterations – specifically hypermethylation – within the viral URR can deregulate E2 function and thereby cause a substantial increase in E6 and E7 expression.

The molecular biology of HPV-induced tumors has historically been studied predominantly in the anogenital area and most of the knowledge resulted from research in cervical carcinoma. At ATB, we are equally interested in deciphering the molecular mechanisms that lead to HPV-induced cancer in other parts of the body such as in the head and neck region.

One particular focus of our research are the epigenetic modifications that occur during the course of an HPV infection and are in turn promoting the formation of cancer.

Our research in HPV pathogenesis provides the foundation for our diagnostic and therapeutic projects.

Determination of a distinct epigenetic profile in HPV-induced cancers

Illuminating the epigenetics of HPV cancer